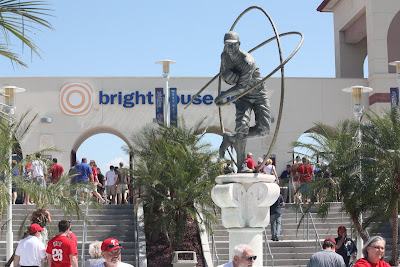 Our long northeast nightmare winter is over. It's 80 degrees and sunny, with the Phillies ready to host the Orioles in Clearwater. Cole Hamels, the youngest of Philadelphia's "Four Aces" got the start and, typical of an early Grapefruit League game, seemed more eager to work specific pitches in his repertoire than treat it totally as a regular game situation. 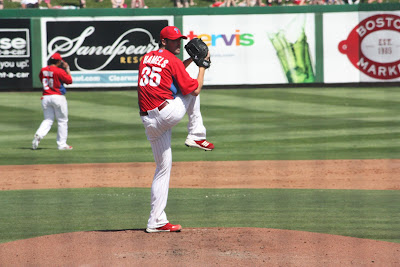 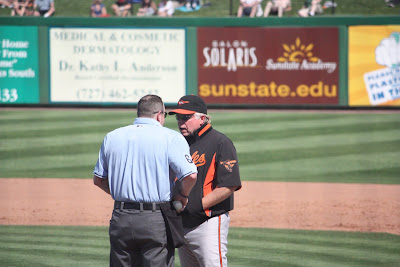 Above: Orioles manager Buck Showalter still loves that jacket.
Below: A Phillies logo you won't see at Citizens Bank Park. 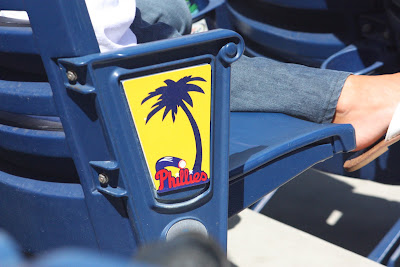 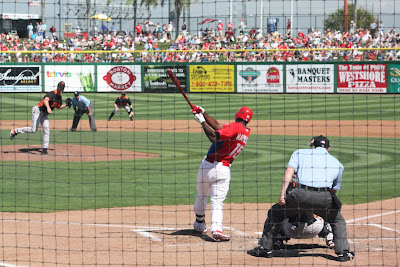 Above: John Mayberry Junior, who caught my eye two springs ago, now among those trying to win Jayson Werth's old job as the Phils rightfielder.
Below: Of course, he wanted to see The Birds play! 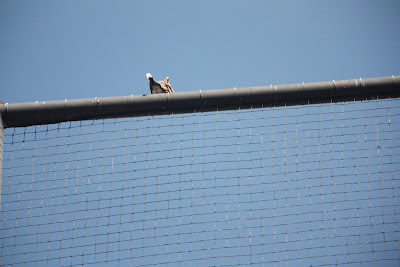 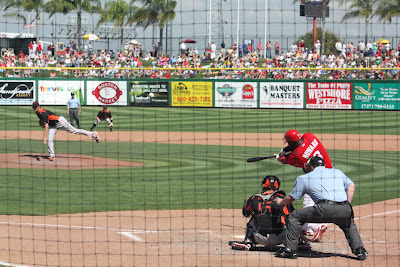 Above: Ryan Howard, who with Werth gone and Chase Utley's knee barking, will have to shoulder more responsibility for the Phils offense, connects against the Orioles lefty Brian Mattusz in the 4th inning. "Outta here" to the left field Tiki Bar. 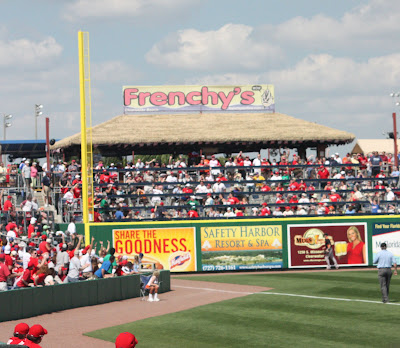 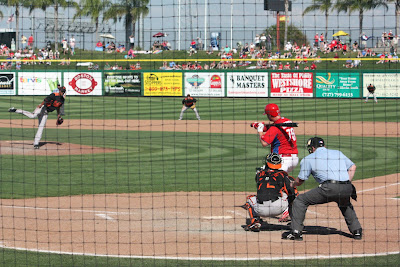 Last year, Manhattan College product Matt Rizzotti became one of the rising stars in the Phillies farm system (I caught him playing for Reading at New Britain in July). Nice to see him in a Phils uniform, taking over for Ryan Howard in the late innings. 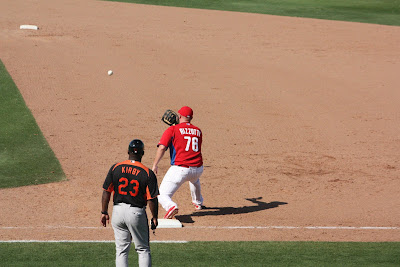 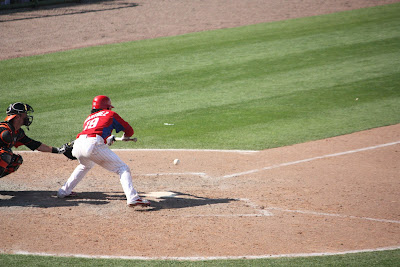 Outfield prospect Michael Martinez, trying to make the Phillies after spending five years in Washington's farm system, lays down a bunt as part of the Phillies come-from-behind rally. 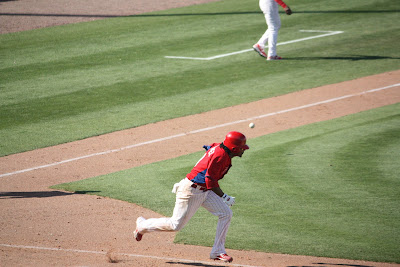 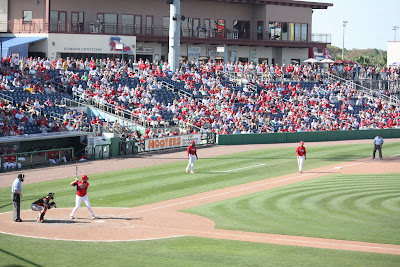 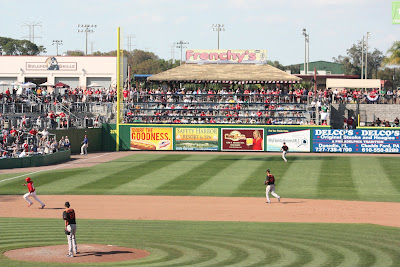 They scored twice in the bottom of the 9th for a 4-3 victory. 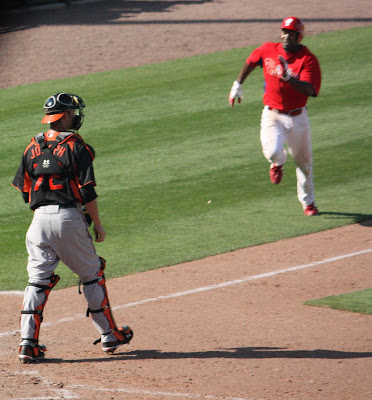 Mike McCann said…
Its fun looking back on these a decade later, knowing how the careers played out of those we see here. Hamels is a borderline Hall of Famers, Mayberry underwhelmed and Rizzotti never made the majors.
That's the beauty of sports. Spontaneous.
June 22, 2021 at 4:19 PM

Popular posts from this blog

After waiting for Yankees GM to pull off a move, fans got their wish late Sunday night. Catcher Gary Sanchez 's up and down tenure in pinstripes ended, when he and infield Gio Urshela were sent to the Twins in a package headlined by Josh Donaldson . A slugging 3rd baseman with a better-than-average glove, Donaldson has starred for the A's, Braves, Blue Jays and Twins -- but is now 36 and has battled injuries of late. There's also a fascinating subplot, as Donaldson publicly called out New York ace Gerrit Cole after the mid-season crackdown on pitcher use of "sticky stuff." Also included in the deal, infielder Isiah Kiner-Falefa, in whom the Yankees showed interest before the lockout before he was sent from Texas to Minnesota on Saturday. Hours later, he's recast as a stopgap while top prospects Anthony Volpe and Oswald Peraza get more time to develop in the minors. Sanchez's unsolved issues, as both a hitter and catcher, overwhelmed his still impressive po
Read more

The Bird is Back! 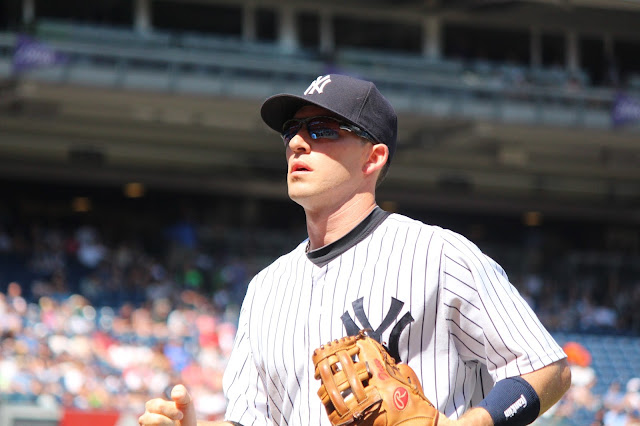 One of the Yankees questions heading into Spring Training seems to have been answered after just a week of games. 1st baseman Greg Bird, who missed all of 2016 after shoulder surgery, seems to have recaptured the form that caught everyone's attention the year before. Thursday night, he belted his third Grapefruit League homer; this one a bomb that soared out of Steinbrenner Field. Making his debut in 2015 after Mark Teixeira went down with a broken leg, the big lefty looked totally at home, hitting 11 home runs as the Yanks went on to earn a wild card. But after the season-long layoff, and an underwhelming performance in the Arizona Fall League, it was reasonable to wonder if he's be ready to step back in. As of now, there's a lot less doubt.
Read more 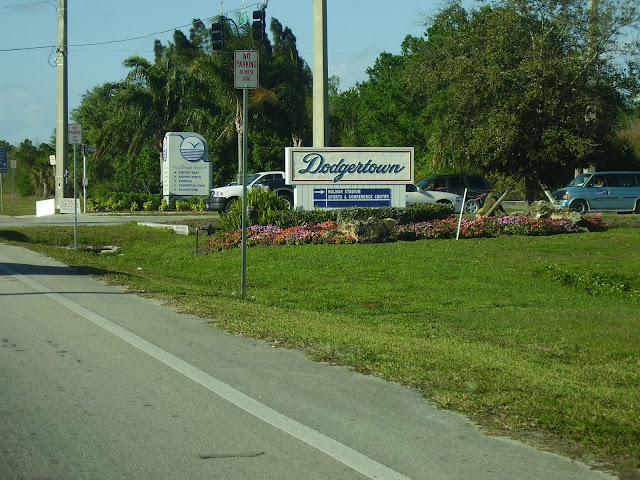 So much is being written this week about the Dodgers' departure from Vero Beach, I felt it only fair to serve up a few more glimpses of this baseball oasis from my 2005 and '07 visits. Six World Series champions began their preparation here. While a little commercialism has encroached over the years, Holman Stadium is still open, airy and uncluttered. This view of the press box and grandstand brings to mind the terrific article David Hinckley wrote in the New York Daily News on his youthful connection to the Dodgers: http://www.nydailynews.com/sports/baseball/2008/03/17/2008-03-17_a_farewell_to_dodgertown.html Baseball's easy going pace makes an ideal match with a small field in rural Florida. Fans are so close, you wait to hear the thunk of the ball hitting the catcher's mitt -- except when it bounces away. And at times, you can even hear the quiet of a bygone day.
Read more

Mike McCann
I lived my dream as rock and roll DJ and radio sports anchor, while also more than 30 years writing about music and pop culture nostalgia.